"Daughter of smoke and bone" by Laini Taylor 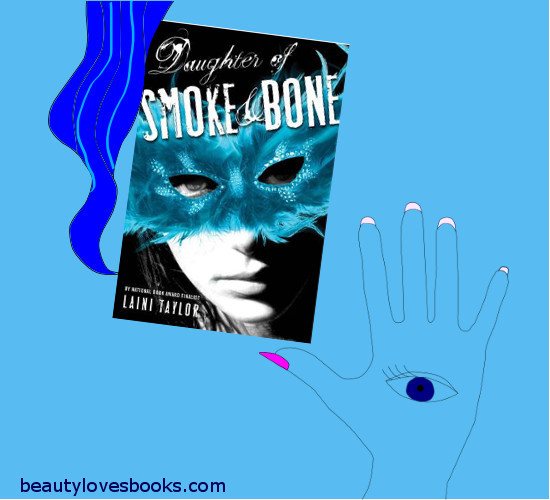 "Daughter of smoke and bone" by Laini Taylor is a book that gets a lot of positive feedback on the Internet. I had such high hopes for it but I don't know why it took me forever to finish it. The genre of this book is fantasy and the world created in it is definitely complicated and interesting. I would say that the story is just too much of a fantasy for my personal taste. If you are a massive fan of fantasy novels this one definitely deserves attention.

The main character in "Daughter of smoke and bone" is Karou. She is 17 years old, she studies art in Prague. Her best friend is a girl named Suzana. Karou has bright blue hair that grows in this colour from her head and she was bred by Brimstone, who is not human. She runs errands for him which include going through portals and buying teeth. Karou has no idea who is her foster father and for what he uses the teeth. She has eyes tattooed on her hands. At the moment hamsa jewelry is really popular and from this book you can learn another meaning for it.

It turns out that Brimstone belongs to the himera race who are in war with the angels. Akiva is an angel who destroys the portals between the human world and the world of himera. This causes for Karou to lose touch with Brimstone. After meeting Akiva, Karou finds out the truth about herself. The book tells a love story but you can never guess what happens at the end.

"Daughter of smoke and bone" is the first book in a trilogy. You can find the second one "Days of blood and starlight" in the bookstores too. There is going to be a movie based on the book in the near future.