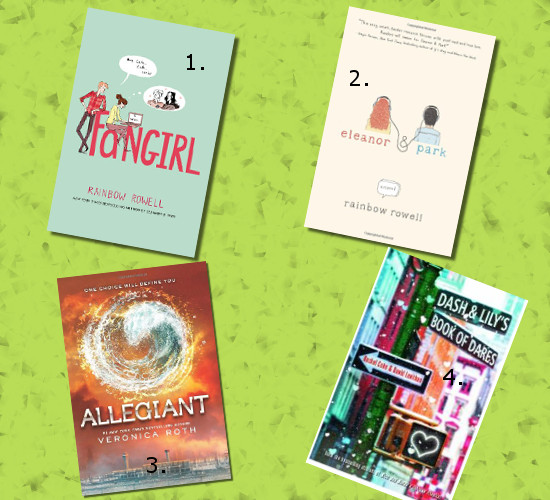 At the beginning of January I published a post with the books I was planning to read by the end of the month (you can read it here). I am a little bit late with this, but I wanted to share with you what I think about the four books that I chose to read last month. I never write spoilers, so don't worry about reading this post.

At the beginning of January I read "Mr. Penumbra's 24 hour bookstore" by Robin Sloan. I highly recommend this book, I gave it four stars and you can read a review about it here. Here are a few words about the four books that I planned to read in the month of January:

This book is really entertaining and I really liked it. I've written a review here.

2. "Eleonor and Park" by Rainbow Rowell

I have a few pages left to read from this book. "Eleonor and Park" is definitely quite different from Rainbow Rowell's other book. It tells the story of a teenage love between an overweight girl, who comes from a family with domestic violence, and a boy, whose mother is Korean. Both kids are bullied at school. I'll be writing a review after finishing this book, because it definitely deserves attention.

The third book in the "Divergent" trilogy had disappointed a lot of people and had even made them cry. I don't share this opinion, I really liked this book, I liked the fact that it is different from the previous two books. The first books were told from Tris' point of view and this one is told from two persons' perspective - Tris' and Tobias'. I recommend this book, but I understand why so many people don't like it.

I wasn't that impressed with this book. "Dash & Lily's Book of Dares" is a romantic love story. The story taked place during Christams time, the 16 years old Lily leaves a notebook with dares in a bookstore and the 16 years old Dash finds it and they start exchanging the notebook after writing new dares in it. I personally found the story to be a little boring. If you are a huge fan of romantic novels and you are a teenager, you may like it. I didn't find anything annoying about this book, it just didn't impress me very much.