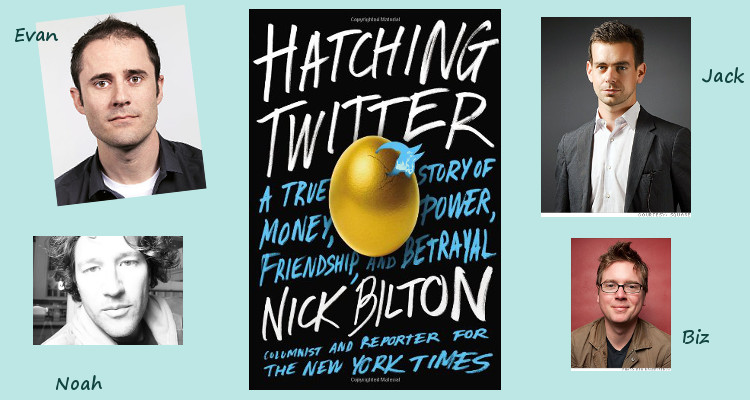 I managed to read just two books in May. One of them was Hatching Twitter by Nick Bilton. I was very curious to find out more about Twitter, because I think that it is the social network that is based on the weirdest idea possible. Almost noone in my life uses Twitter and most of them say that they don't quite understand it.

After I read the book I am trying to tweet more (you can find me here) and I am totally obsessed now. I would like to have more followers though. I really enjoyed Haching Twitter and I highly recommend it. I think that a lot of people agree with me, because the book is going to be turned into a TV series. I can't wait to watch it.

Hatching Twitter is written like a novel, Nick Bilton's writing style is very engaging and the story is not at all boring like a lot of other documentary books. I really liked the characters described in the book. Twitter has four founders:

Evan Williams - At the beginning of the book Evan moves to the Silicon valley and starts learning programming. He creates a blog platform which he sells to Google for millions. Most of you are probably already familiar with this platform - Blogger. How can someone not like Evan? He finances Twitter with the money he gets from selling Blogger.

Noah Glass - Noah is Evan's neighbour, they both work from home, so they become friends. After Evan sells Blogger, Noah convinces Evan to start a new company together - Odeo. Odeo fails, but Twitter is born.

Jack Dorsey - Jack meets Evan in a coffee shop in San Francisco and recognises him as the founder of Blogger. He asks Evan for a job in his new company Odeo. Twitter is Jack's idea. He is the first CEO of Twitter. Jack is my favorite character in the book. He is described as an introvert and a shy person. For him Twitter is a way for people to feel less lonely.

Biz Stone - There's not actually much about Biz in this book. He quits his job in Google to join Twitter (Odeo). He is described as a good person with a sense of humour. He has a book written "Things a Little Bird Told Me: Confessions of the Creative Mind" that I am interested in reading.

The original idea of Jack about Twitter is for it to be just status updates that people tweet from their phones. Evan sees the social network more like a micro-blogging platform and for him the future is in the web version. Noone is prepared for the social phenomenon that Twitter turns out to be. The users find a lot of new ways to use the social network. Hatching Twitter is about the fights for power between the founders and the difficulties that they have to overcome in creating Twitter. There are a lot of funny moments in this book and I am sure that most of you are going to like it.