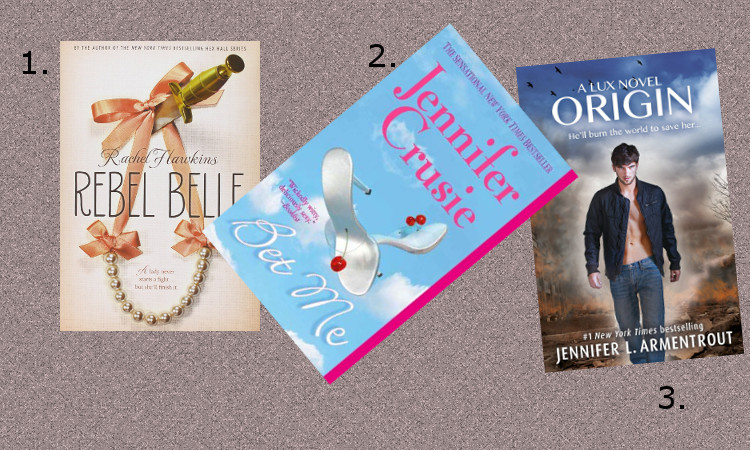 I read only three books in August. I am quite disappointed with myself. I hope that I have more time for reading in September. The three books I read are:

Page number: 352
Publication date: April 2014
Translated in Bulgarian: no, but the other series by Rachel Hawkins Hex Hall is published in Bulgarian. Let's hope that this book will be too.

The first book from the Hex Hall trilogy by Rachel Hawkins came with a parfume as a gift and I immediately decided that this book won't be anything special. The Hex Hall series was amazing. Man shouldn't judge a book by its cover. Rebel Belle is the new book by Rachel Hawkins. It got a lot of positive reviews right after it was published. I was sure that I was going to like it.
The main character Harper is a Southern belle like Scarlett O'Hara and Lemon Breeland. She has the perfect life. Harper is the prom queen, her boyfriend is the most popular boy at school, she is a straight A student. During one of the school dances she goes to the bathroom to apply a lipgloss. There she finds one of her teachers who has been attacked. Before he dies he gives her his superpowers. Harper is now a Paladin who has to protect her Oracle who turns out to be David, a boy she hates.
It was so difficult to get my hands on this book, there is no Kindle edition and the shipping to Bulgaria was very pricy. Audible added Rebel belle to their library so I was able to at least listen to this book. To be honest I was disappointed with it. The reason is maybe the fact that I had such high expectations. I think that Rebel Belle is the first book in a new series, but I won't be reading the second one. I don't find the world in this book to be very interesting. Harper as a charcter was sometimes annoying and superficial.

2. Bet me by Jennifer Crusie

Bet me is a romantic comedy and I really enjoyed it. Jennifer Crusie is an amazing author and I hope that they publish some of her books in Bulgarian. The main characters in Bet me are Min and Cal. Min is not a skinny girl by any means and her boyfriend has just dumped her. Cal is the perfect man who was never going to notice a woman like Min if it wasn't for a bet. They fall in love. There's nothing that unique in the story, but the writing style is so good and I have't read a good romantic comedy for quite some time. I would gladly read more books by Jennifer Crusie.

Page number: 418
Publication date: August 2013
Translated in Bulgarian: will be available in Bulgarian on 5 November

Origin is the fourth book in the Lux series by Jennifer L. Armentrout, I've written about it here. This book was a little bit different than the others. In the previous books the story was told from Katy's perspective. In Origin we can see both Katy's and Damon's points of view. The last book in the Lux series is already published in English. In Bulgarian it would be out on November 19th. I think I am already tired of this story. I liked Origin, but it took me forever to finish it.